Chaim is an author and illustrating cartographer from the Netherlands who loves to read, write and draw. You can usually find him at home with his wife and son, enjoying their company and that of a good book. He loves history and fantasy and, when he’s not visiting fantasy realms that other authors have created, he’s creating new ones from scratch.

The Melding
(aka Earth Meld)

James, our hero, is in his second-to-last year of schooling when a band of Seekers raids their village. Chris, his older brother, The Chosen One, leads his soldiers on a counterattack to repel them, but much of their supplies together with a number of women and children are taken.

As the council determines what course of action is needed, signs of a new “meld” (a seismic event similar to an earthquake) start coming in, together with the looming threat of another Seeker incursion. The Chosen One leads their whole army into a daring rescue mission and does not return. In the midst of the ensuing chaos, just as the “meld” starts, the village is assaulted while on the move. All hope seems lost for, without The Chosen One, they will surely perish. This is when James decides to go and rescue his brother from the clutches of the Seekers.

Follow him on his journey through an ever-changing world as he encounters many other tribes and learns more about the world and about himself than he would have ever believed possible. Will he find his brother and restore The Chosen One to their people? 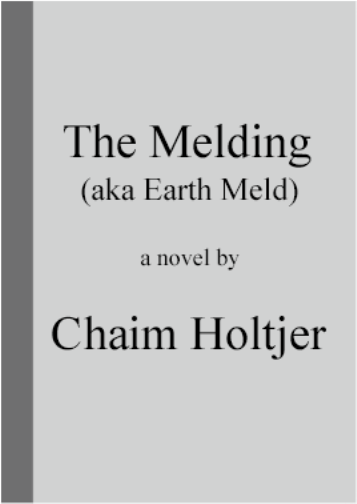 Chaim Holtjer, born in 1988, is an author from the Netherlands who lives with his wife and son—and an assortment of pets. His study of history and English paved the way to becoming a writer. When he’s not writing, he enjoys drawing maps as a professional freelance cartographer.

He loves everything about history and fantasy. It is his love of everything historical and fantastic that has led to hobbies such as sword-fighting and horseback riding as well as reading and writing. Through his writing, Chaim creates new worlds to explore and characters to follow on their adventures. However fantastical the stories or worlds may be, they each hold a universal truth just waiting to be uncovered.

Chaim developed his love of reading at an early age and today he devours books at a steady pace. With his writing, he is now working on a new epic fantasy called The Melding (aka Earth Meld), a novel in which the world itself is not just the setting, but also a character in its own right.

I’m not big on sports, but I do enjoy sword fighting, horseback riding, boxing and Wushu (a standardized form of traditional Chinese martial arts).

I also have several pets.

My favourite author is Neil Gaiman and his novel Neverwhere is my favourite among his books. I also very much enjoy the books by Bernard Cornwell, especially the Sharpe and Saxon series. I love the Harry Potter books (Doesn’t everyone?) and the fantasy series by Raymond E. Feist. I enjoy reading the classics and modern fantasy in equal measure. For comedic relief, I read The Dresden Files by Jim Butcher (which are wonderful novels to read as long as you don’t take them too seriously). I could talk for hours about my favourite books and my favourite authors, but I’ll leave it at these for now.

My all-time favourite films are the Lord of the Rings trilogy. Interview with the Vampire, Gladiator, Troy, Braveheart, The Patriot, The Matrix and Kingdom of Heaven are also some of my favourites. Really, for me, the list could be longer than any polite conversation warrants.

My reasons for enjoying these films are as diverse as the films themselves. But usually it’s a specific atmosphere, story, setting or memory that they elicit.

My musical interests are broad and diverse. I’ve dabbled with playing a couple of instruments (piano, guitar and violin) but mastered none of them. (There are only so many hours in a day, right?) I enjoy listening to classical music and really appreciate good movie scores, fantasy and medieval music, folk and pagan music, and alternative music in the direction of (power/symphonic) metal and industrial. The music I listen to depends on the mood I’m in and on what I’m reading, writing or drawing at the moment.